Dr. Jeremi W. Edwards is a Louisiana native, Graduate from McNeese State University with a bachelor’s degree in Music Education. Dr. Edwards then graduated from the University of Louisiana at Lafayette, with a Master of Music in Theory and Composition where he studied composition with Dr. Quincy Hilliard. Dr. Edwards has recently compleated his PhD in Music Composition program at the Louisiana State University in the studio of Dr. Mara Gibson. Dr. Edwards's Music is a synthesis of his love for neo classical textures and an impressionistic harmonic texture. Dr. Jeremi W. Edwards is an Alumni of Kappa Kappa Psi and Phi Mu Alpha Sinfonia. Jeremi Edwards is also the Assistant Corps Director for the Louisiana Stars Drum and Bugle Corps and has recently joined the Arts advisory board for the Cultural Noir Theater Company in San Diego California. 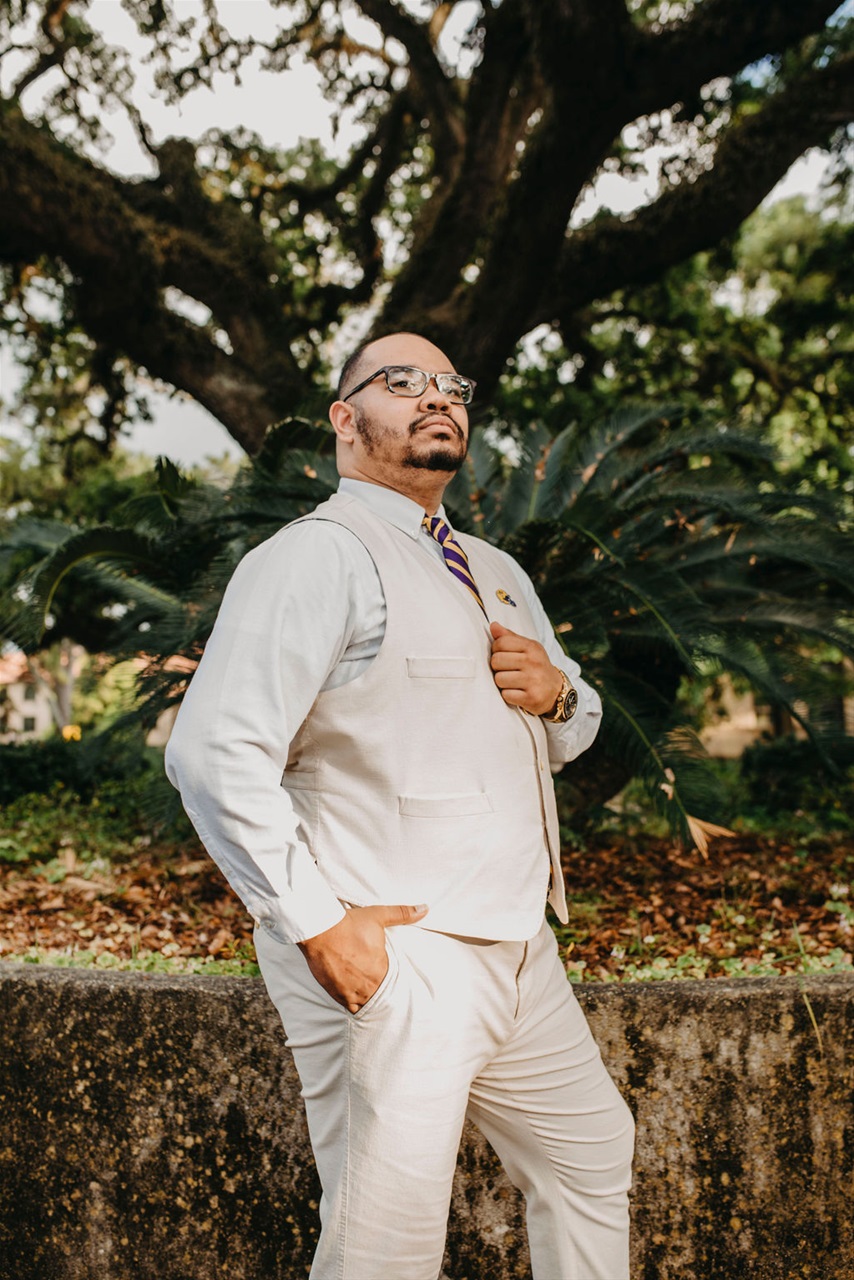 Dr. Jeremi W. Edwards was born in Lake Charles, Louisiana on July 29, 1993. “Jeremi’s passion for music could be seen from an early age,” his mother Elena says, “I remember watching both Fantasia and Fantasia 2000 on repeat every single day.” It wasn’t long before he joined the schools band program where he picked up the flute in honor of his grandmother who had done the same years ago. Mr. Edwards Attended Lagrange Senior High School where he performed in the Marching band, and both concert and jazz bands Under the Direction of James Hearne. His senior year Mr. Edwards won the title of Drum Major for the Lagrange Gator Marching band leading the band to several Superior Ratings during the 2010 fall marching season. Mr. Edwards’ experience as a student leader and student educator in his band could be seen in parallel in the Boys Scouts of America where he received the Rank of Eagle Scouts in 2008 and a Vigil Member of the Order of the Arrow in 2012.

Post-graduation from Lagrange Senior High School Dr. Edwards passion for music and experiences in the Arts around Calcasieu Parish gave him the confidence to Attend McNeese State University at Pursue a Degree in Music Education. In the Fall of 2011 Mr. Edwards began his studies under Dr. Judy Hand in her Flute Studio and Dr. Jeffery Lemkey in Music Education and was also an active member of both the Pride of McNeese Marching Band and The McNeese State University Wind Ensemble under the Direction of Dr. Jay Jacobs. During his time at McNeese Dr. Edwards initiated into Kappa Kappa Psi National Honorary Band Service Fraternity in the Spring of 2012 and Initiated into Phi Mu Alpha Sinfonia in Fall of 2012. In his final semesters at McNeese Mr. Edwards Began private composition lessons with Dr. Machel Buckles to help build a Music Composition portfolio to use to apply for graduate school. Dr. Edwards graduated from McNeese State University In lake Charles, Louisiana with a bachelor’s degree in Music Education-Instrumental Grades K-12 Concentration in the spring of 2017.

Post-graduation Dr. Edwards continued his education on the mastery level in the fall of 2017, where he attended the University of Louisiana at Lafayette for a Master of Music in Theory and Composition. At the University of Louisiana at Lafayette Dr. Edwards studied Music Theory with Dr. Wesley Branford, Film Scoring with Dr. Garth Alper and Music Composition with Dr. Quincy Hilliard. During his four semesters at ULL Dr. Edwards preformed with the University’s Wind Ensemble in the flute section under the direction of Dr. William J. Hochkeppel. At the University of Louisiana at Lafayette, Dr. Edwards was a Graduate Assistant for the Pride of Arcadian Marching band directed by Dr. Jason Missal or Dr. Brett Landry; a Graduate Assistant for the school of music Theory department directed by Dr. Wesley Bradford; and was the Graduate Assistant Dr. Hilliard’s Composition Studio. During his time at ULL Dr. Edwards had his music performed by several Instrumental studios and chamber ensembles as well as a commission for the flute studio for the school of music Experimental chamber recital where he used a unique graphic score and a fish tank. During his time at ULL Dr. Edwards completed several short film scores for different scenes and short films as well as music cues for several video games that are in development that were partnered with the computer and visual design departments. Upon completing his degree Dr. Edwards published his master’s Thesis Dream Sequence a Rhapsody for Double Quintet 2019. While completing his finial semester at the University of Louisiana at Lafayette, Dr. Edwards also accepted to the Mostly Modern Festival as a composer in Saratoga Springs, New York summer 2019 where His piece “Dream Sequence” received its world premiere by the American Modern Ensemble in 2019.

Post-graduation Dr. Edwards continued his education on the Doctoral level at the Louisiana State University starting in the fall of 2019. Dr. Edwards perused his PhD in Music Composition under the teaching of Dr. Mara Gibson. While at LSU Dr. Edwards was Graduate Assistant for the School of Music in the Music Theory department under the direction of Dr. Inessa Bazayev and Jeffery Perry, and Oliva Lucks and is also the Teacher on Record for Aural Skills 1 - 4. Dr. Edwards was also selected as a finalist for the LSU Symphonic Winds Call for scores spring 2020. The chose Compositions will be premiered in the Fall of 2020 as well. Dr. Edwards has recently completed several works for Orchestra and String quartet as well as a six movement song cycle for Soprano, Baritone, Piano and woodwind quintet with poems from his mother’s childhood which was premiered at LSU this past spring semester of 2021.

During his time at LSU Dr. Edwards has had several world premieres including a Duet for Tuba and Percussion depicting Jackson Square of New Orleans. In the Summer of 2021 Dr. Edwards was accepted into the Collaborative Piano Institute as a composer for the Four Corners Ensemble who were in residence at this summer program at the LSU school of music. The Collaborative Piano Institute is a unique summer program created by collaborative pianist to cultivate an intensive experience. During this summer program Dr. Edwards was able to have two world premieres one for the Emerging artists recital which was a vocal piece that includes strings and piano and the other for the Four Corners Ensemble. During his second semester at LSU Dr. Edwards was a finalist for the Constantinides New Music Ensemble (CNME) call for scores spring 2021. The compositions chosen were premiered as part of the CNME concert in New York City’s Carnegie Hall in the Spring of 2022

Durring his Final year within the Ph.D program Dr. Edwards focused on his Composition pedagogy Dissertation Interviewing several professors from around North America and working on his Final projects at LSU. The Second half of his Dissertation centered around an aleatoric experimental event score work for chamber Orchestra. This piece explored sound space and time andwas premiered at the Louisiana State University’s Museum of art in downtown Baton Rouge at the Shaw Center for the arts in the spring of 2022. Dr. Edwards Graduated with his PhD in Music Composition with a Graduate minor in Musi Theory at LSU in the Spring of 2022.

Post Graduation Dr. Edwards pursed faculty positions around the country in hopes to continue his passion for music education and music composition. Upon his search, Dr. Edwards was Selected as the new Assistant Professor of Music Theory and Composition at the W.A. and Dorthay Hanna Department of Preforming Arts at The McNeese State University in Lake Charles Louisiana. Dr. Edwards is Currently Teaching Several Undergradute Music Theory courses includeing ,MUSC 100 FUNDAMENTALS OF MUSIC Fall 2022, MUSC 213 PRINCIPLES OF MUSIC II Fall 2022 , MUSC 415 MUSIC IN THE 20TH CENTURY Fall 2022. Dr. Edwards is also now the Director of the New Music Theory Mentorship Program. The new team of Senior students will provid mentorship and tuttoring services to the students with the music department. Dr. Edwards will have several new Wind Ensamble and Band pieces being premiered in the fall of 2022 and spring of 2023.